A day in the life of an assistant

David was working with me on Friday and Saturday and I was at Pittodrie House Hotel on both days. On Friday it was the wedding of Robyn and John at Our Lady of the Garioch and St. John the Evangelist, Fetternear, and reception at Pittodrie House.  On Friday David was taking the informal photographs but also assisting me on a wet and windy day. It is very useful to have someone to hold the dress in place until the last minute and then dive out of the shot. Once it is in place, I will take several photographs in quick succession and pick the best one. My D3s can take at an incredible 11 images per second (yes 11 high resolution photographs in 1 second!). In the shot below (and several others) David has been captured diving out of shot. Click here to see the formal shots and here for the informal. 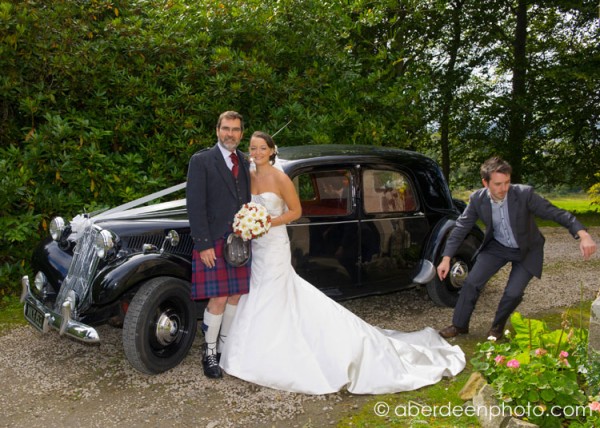 On Saturday, it was the wedding of Kay and Rick at Chapel of Garioch and then to Pittodrie House again. David was assisting but when the display organised by Kay and Rick, by North East Falconry Centre, took place he could not resist getting out his camera and we both took photographs of the guests getting entertained by the birds. As you will see, one of the Falcons decided David made a good perch! 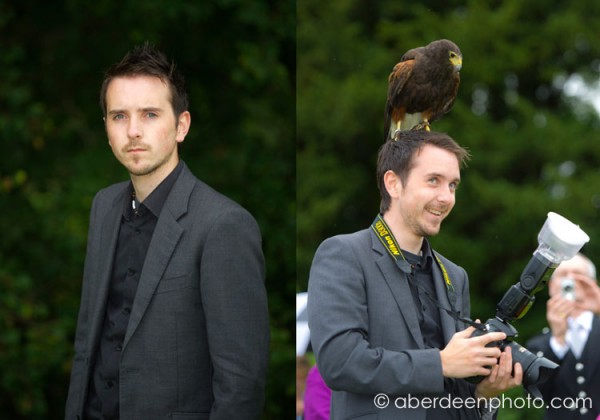 It is very useful to have an assistant, not just to set the dress but also to act as a model. On Saturday, it was raining and we needed to work as quickly as possible so David and I went and set up where we were going to take the photographs and get the lighting set up so that when Kay and Rick got there, we were ready to shoot. As you will see the shot above has too much flash and I obviously adjusted this before photographing the Bride and Groom. Click here to see Kay and Rick’s wedding photographs from Saturday.