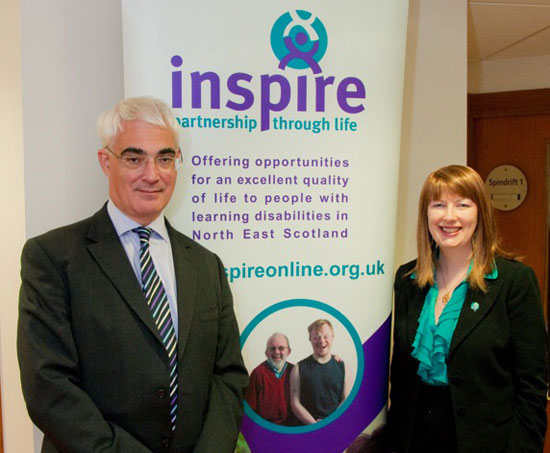 Last Friday (16th October), Chancellor Alistair Darling was in Aberdeen and visited Inspire at the Beach Boulevard. We were asked to take photographs but were sworn to secrecy for security reasons. Greig took a series of photographs of the Chancellor while he was there – click here to see the images. These images are for Inspire to use in promotional material and their website.

Inspire is a charity that aims to offer opportunities for an excellent quality of life to people with learning disabilities in North East Scotland. The Chancellor met with the team at Inspire’s new multi-resource centre on the Beach Boulevard, Aberdeen. Included at the new centre is Café Coast, a social enterprise operating under Inspire Ventures Ltd. They provide training and employment opportunities for people with learning disabilities within Café Coast and its partner enterprise, Inspire Conferences.

The Chancellor is no stranger to Aberdeen. He was educated in Kircaldy and the private Loretto School in Musselburgh , then attended the University of Aberdeen where he was awarded a Bachelor of Laws (LL.B). He became the head of Aberdeen University Students Union. He entered Parliament at the 1987 General Election in Edinburgh Central defeating the sitting Conservative MP Sir Alexander Fletcher by 2,262 votes, and has remained an MP since.