On Wednesday this week (12th May, 2010), Deeside Golf Club hosted the Colin Montgomerie Ryder Cup celebration. This event was organised to raise money for the Elizabeth Montgomerie Foundation to fund the building of a Maggie’s Caring Centre in Aberdeen. Colin started the foundation in memory of his Mum who died of lung cancer in 1991.

A Maggie’s Centre is a place to turn to for help with any of the problems, small or large, associated with cancer. Click here to see how much their centres can help suffers and their families. Having lost my Dad to cancer at 51 (my age), and having to support my Mum through this, I realise how much a Maggie’s Centre could have helped. I was therefore delighted to provide our services and a photograph for every team member as a contribution to such a good cause. Click here to view the photographs of the golf and here for a few shots taken at the dinner. 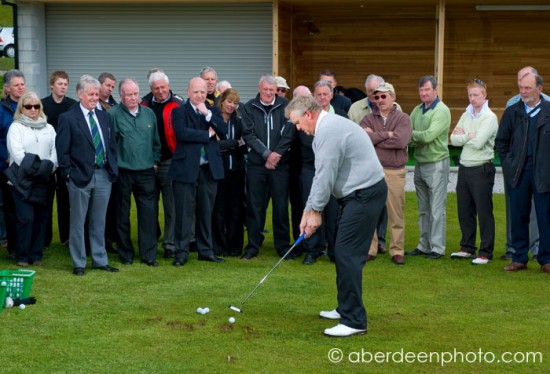 The day started at 8.30am with a clinic for the Deeside members. To learn and watch the best ever European golfer , and this year’s Ryder Cup Captain was something very special for the members. Click here to see detail’s of Colin’s incredible record which includes finishing first on the European Tour Order of Merit every year from 1993 to 1999 (a record for most consecutive Orders of Merit). He has thirty one victories on the tour, including the 1998, 1999, and 2000 European PGA Championships. He first reached the top-10 in the Official World Golf Rankings in 1994 and spent almost 400 weeks in the top-10. His highest ranking was number two. In his prime Montgomerie was considered one of the best drivers of the golf ball in the world and became a very precise iron player, often able to judge the distance he hit the ball exactly from long range.

Colin arrived a few minutes late and joked that he took 20 minutes to get from his bedroom to the front door at Stewart Milne’s house where he was staying. A large crowd of members were gathered behind ropes set up beside the driving range. The first thing that Colin did was ask everyone to come inside the ropes and get closer and it was immediately apparent that he was very affable and approachable. He was scheduled to do a 45 minute clinic but he stayed for an hour and gave an excellent insight into his approach to the game, and some great advice to large number of lucky members watching. After this, it was off to a press call, and then down to meet me for a photograph at the 18th green. 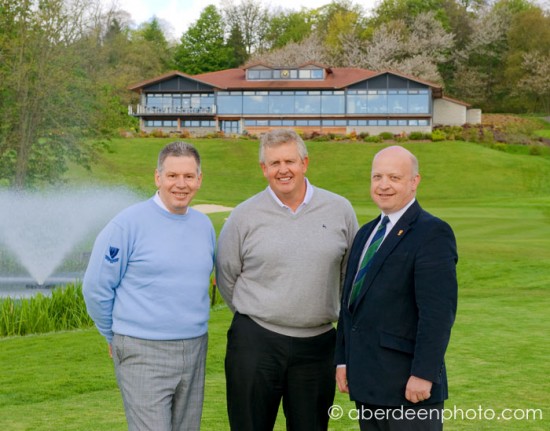 Frank Coutts, Colin Montgomerie, and Doug Watson with the club house in the background

I photographed Frank with the Club Captain, Doug Watson, and the professional, Frank Coutts. David, my assistant took the file back and printed a 24 inch print and mounted it. He brought this back later when Colin and I were on the 14th tee. Colin signed it and David then got it framed and returned ready to be presented by Colin to the club at the dinner at night. 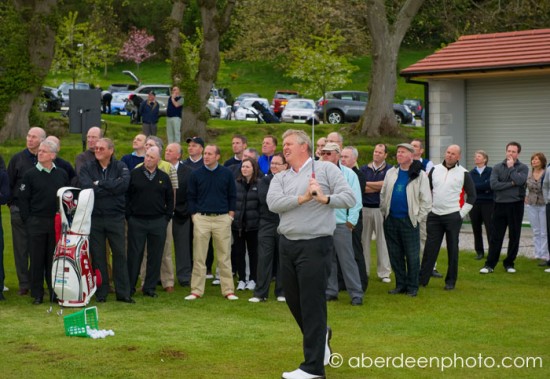 The second clinic was for the players competing and Colin once again captivated those watching with his tips and advice and stories from his long career. He described how it felt to stand over the 5ft putt to win the Ryder Cup in 2004 at Oakland Hills. This year he is Captain of European team and with his incredible Ryder cup history, and his obvious passion for this contest, I am sure he will be a great Captain. In a quote from his website, he says “If I tell you that I can remember virtually every shot I have hit in a Ryder Cup, it will go some way towards explaining how much this biennial contest means to me” 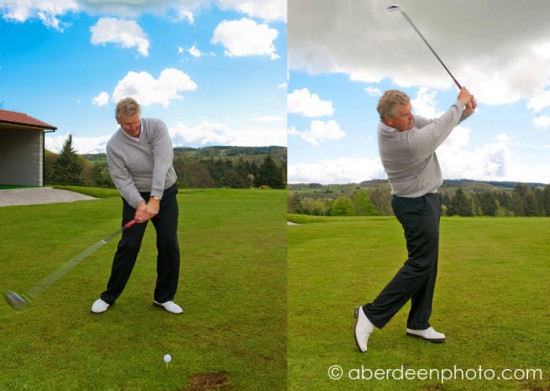 He spoke about his approach and made it look very easy to decide where to place the ball on the fairway simply by making very small changes to his very smooth swing. Click here to get some of Colin’s tips. The 80 players were then all ready, with their new lighter grip, to set off to their designated tee for the shotgun start. I got a golf cart and Colin loaded his clubs and I loaded my camera bag and I took him to 14th tee where we were to spend the next 4-5 hours photographing all 20 teams for the official commemorative  team photograph. Every team got a print for each player posted or delivered to the 20 captains.These were 10×8 prints on a new pearl metallic paper which looked very good. However some of the best shots were of Colin chatting and playing the 14th with each team. 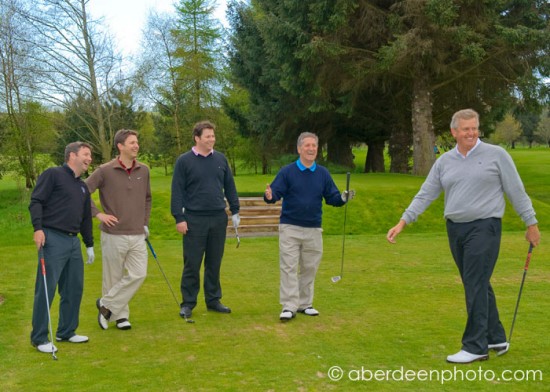 The winning Halliday, Fraser and Munro team playing the 14th with Colin

We were very lucky with the weather and as I knew so many people, I had a very enjoyable few hours with Colin and the teams and got a lot of informal shots. I think looking at the photographs it easy to see how personable he is, and nothing like the image portrayed occasionally by the press. 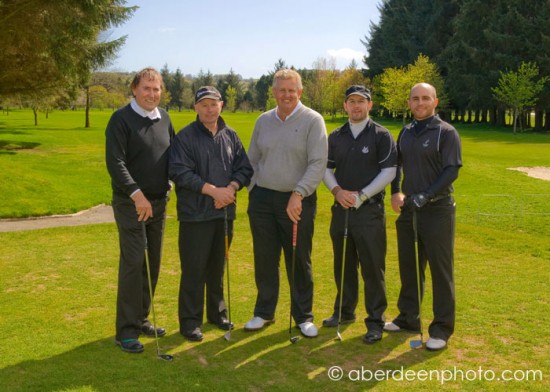 Stewart Milne and his team on the 14th tee

Neil Cordiner (another of many past wedding clients, who I met on the day) had the last team to play at the 14th and Colin’s Dad, James was in this team.  At 80 years old, he still plays off 11.This finished the golf and after this, it was back to the office to give my files to David and Greig, while I changed into my dinner suit before heading to  Stewart Milne’s amazing home, Dalhebity House, which I had heard so much about. 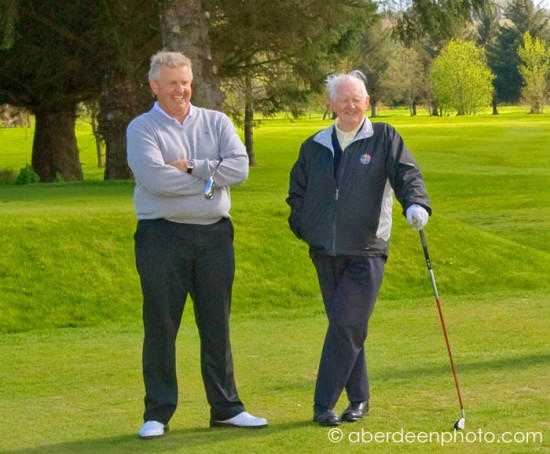 Colin and his Dad watching on the 14th tee

Stewart and Joanna Milne have been great supporters of the Elizabeth Montgomerie Foundation and very generously offered their home as the venue for the Captain’s dinner on Tuesday and the Gala dinner on Wednesday, where 180 lucky guests, myself included, gathered for a great evening in a stunning setting. After my car was whisked away for valet parking, I entered the hall where the guests were getting a glass of champagne while the grand piano was being played.  The entrance can only be described as stunning. Then we walked through the huge dining room to the marquee which looked amazing with the beautiful table settings. 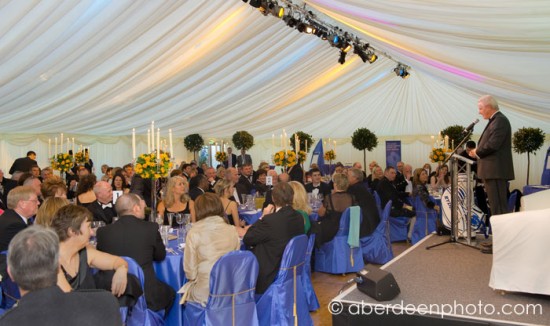 Dougie Donnelly welcomed the guests and arranged the heads and tails to start off the fund raising. We had an excellent meal while being entertained by Dougie and Colin. 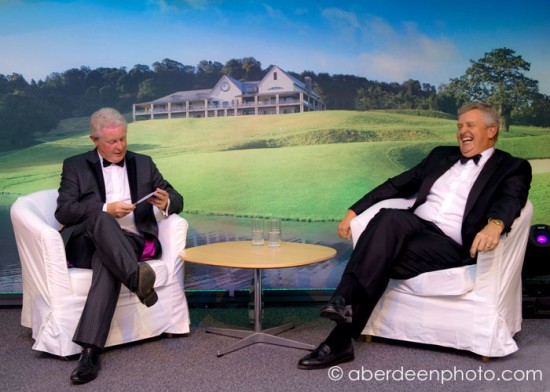 Dougie Donnelly chats to Monty at the dinner

Between the starter and main course Dougie and Colin took seats on the stage to chat and for Dougie to ask questions submitted by the guests. This format worked very well and I think everyone enjoyed it. 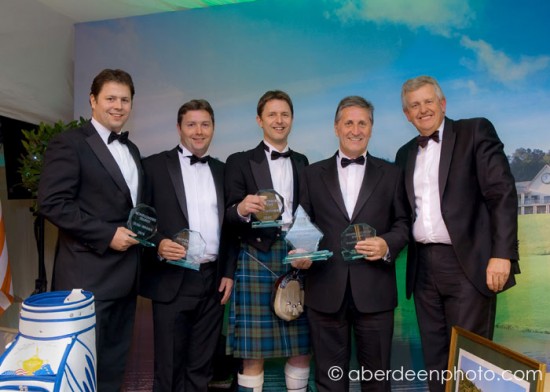 After dinner there was the prize giving and the winning team was a very proud John Halliday and his three sons – Mark, David, and Michael who play off +3, scratch, and 1. After the prize giving we heard from Colin Welsh and Monty about the Maggie’s Centres and then on to the auction conducted by Peter Mitchell. An amazing figure of £100 000 was earned in the evening which when added to the money raised from the tournament is a great start to raising the £2.5 million needed to build Aberdeen’s Maggie Centre.