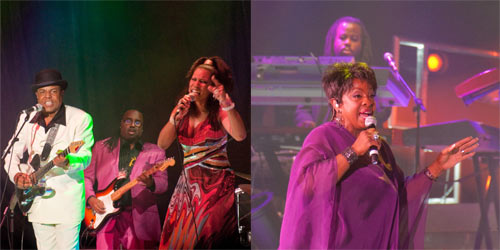 Tito and Nicole Jackson and Gladys Knight at the AECC, 20th October, 2009

Last night (Tuesday 20th October), Sandra and I went to see Gladys Knight at the AECC. The support act was Tito Jackson. Tito’s set included Blues, Motown, and a tribute to the Jacksons where he enlisted the assistance of 3 great female singers including Nicole Jackson, a cousin of the famous brothers. This opening was so good and entertaining that I was not sure if Gladys could match them.

I should not have worried – from the time she stepped on the stage to the closing number – Midnight Train to Georgia, she was amazing. Her voice is incredible and the audience was in awe of her talent. She was also a great entertainer, and had a superb 19 piece Vegas band backing her. Her brother Merald “Bubba” Knight was a special guest and he joined in a great medley of Motown tracks. She sang all her hits – including Help me make it through the Night, Thats What Friends are For, The Way We Were, and the Bond movie theme – License to Kill. 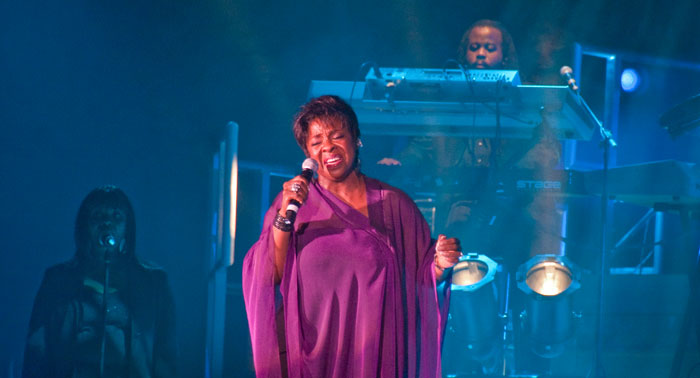 The only disapointment was that the exhibition centre was not full and so many more people could have heard one of the greats on her farewell tour. Several people commented that this was real talent and echoed what I was already thinking – why would you watch programs like X Factor when there is so much good music to listen to!

There was a very strict no photography policy (which I never understand) so I only got a few high iso shots from my seat in the audience.  I did buy the USB stick of the concert which is already on iTunes and linked to the images I did take so when playing the live tracks, the images add to the atmosphere when watching and listening with Apple TV.

I have been to several concerts this year and have photographs at them all so future blogs will show these – Van Morrison, Paul Weller, Simply Red, and Eric Clapton at the Albert Hall.